I love walking the 100 meters to my morning breakfast every day. It’s a simple path and I pass the same shops getting ready for the day. We say hi to each other. I even greet the cows on the road. They too are part of my scenery now. It has become a routine for me this walk to the Nepalese restaurant. I like it there. The food is good, doesn’t cost much. You can get an Aloo Parantha with Curd (yogurt) and Chai for 120 rupees. About a euro or Swiss Franco and a half. I’ve learned that it is these small things, these everyday encounters that give meaning to your life. I am grateful for these simple things. 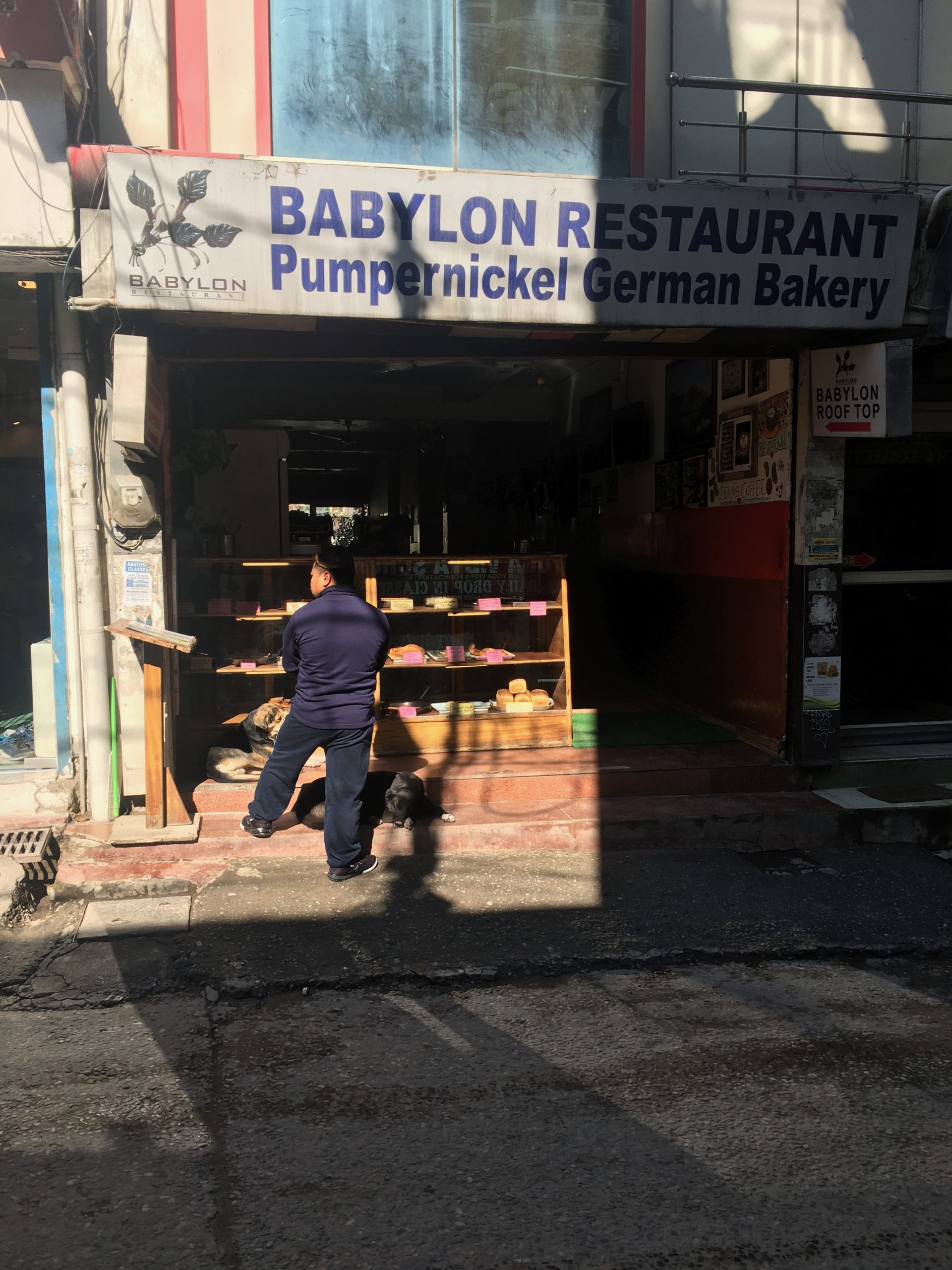 Sitting here at my regular haunt near Lakhsman Jhula having breakfast as usual, getting to know the Nepalese who work here. I’m a regular now and they all greet me. If sometimes the kitchen forgets my order, it doesn’t matter to me. I tell them I have all the time in the world. I have time to think, to write, to read, to sing and to find my Guru; even if that idea is more symbolic than anything else. If you go to the same place every day you come to know the people who live and work there, and you end up building a connection with them. Routine creates friendships.

Fifty years ago I was lost, lost in a sea where the winds and the currents carried me to where they wanted. Not something so unusual, it probably happens to us all when we’re starting out in life. For me, it was a time of exploration but I had not yet found the place I was looking for. Then something happens to you and a seed is planted. I remember seeing a picture of Guru Nanak, really just an artistic rendition of the great Guru, with his white beard and turban and saintly look. I was a student at the university studying philosophy and political science so the moment may have happened at the library paging through a book on comparative religions. It was enough of a spark to eventually change my life. I knew it then, and 4 months later a man with a beard and turban walked into my life.

We long for change, a chance to find where we are going in life and to ultimately feel good about it. Something deep inside of you has to want to change. It’s about making life more meaningful and your ability to see the possibility of it all. If you miss “seeing” the moment the first time, don’t worry for life itself is forgiving and compassionate and will surely give you a second and a third chance to see her.

It takes courage to follow the soul’s path. It is a journey of lifetimes and an unending yearning to live in peace and love. It is only for the brave as Gandhiji said:

A coward is incapable of exhibiting love; it is the prerogative of the brave.

The weak can never forgive. Forgiveness is the attribute of the strong.

You might be blind to these deep rumblings of spirit but one day you might open your eyes ever so slightly like looking into the sun’s rays and then life and its movements will change for you.

We stumble along in life as a result of the decisions we took. For some reason they didn’t fulfill us and bring us the happiness we were looking for. We wonder why the lights in the distant horizon still seem so far away. We pick ourselves up when someone says “no” and chooses not to be with us, promising the heavens that we will do things differently next time. All of that is true and still the soul does its prayer.

And sings the song only he has ears for;

Yet the sky hears his heartfelt song

And tells the clouds to bring the drops of rain.

When you think that the path is arduous and long and that you will never reach your destination; think of Guru Amar Das, the third Guru in the line of 10 Gurus, all followers of Guru Nanak. It was said that he was a follower of Vishnu and spent his time leading groups on pilgrimages to the holy Himalayan sites. One day he heard his brother’s wife singing the songs of her father and was so moved by them that he asked her to take him to meet him. Upon meeting Guru Angad, the second in line after Guru Nanak, he immediately felt something stir in his heart and he became the Guru’s disciple. He was 68 years old. Some would say that he was too old to serve the Guru but he would always answer that the Guru’s service made him young again. Life gives you more than one chance, and it’s not about time that is important. It is about opening the heart to what it longs for. It is about learning and finally arriving home.

There is something irrefutable within you and it is spirit in the purest sense. I don’t think you can deny it. It tells you about what you long to have, to feel, to think and act upon with every waking breath you take. It supersedes apathy and pessimism and reminds you that there is life beyond the negative feelings we often harbor. It is a way out of our human dilemma. It is the wind behind navigating the treacherous seas of everyday life. It is the harbinger and guardian of hope in the world. It is yoga, it is about union and it is about all those small relationships we cultivate each and every day of our lives.